URGENT – WEATHER MESSAGE NATIONAL WEATHER SERVICE FORT WORTH TX 206 PM CST SUN JAN 22 2012 …A WIND ADVISORY IS IN EFFECT FOR MOST OF NORTH TEXAS THROUGH 7 PM… .A POTENT UPPER LEVEL SYSTEM MOVING NORTH OF THE REGION IS SPREADING VERY STRONG AND GUSTY WINDS FROM WEST TO EAST ACROSS THE REGION. WEST TO SOUTHWEST WINDS WILL BE SUSTAINED FROM 20 TO 35 MPH WITH GUSTS OF 40 TO 50 MPH. THE STRONGEST WINDS WILL OCCUR IN THE AREA GENERALLY ALONG AND WEST OF INTERSTATE 35/35E.

I read the weather forecast last night, fearing an outbreak of fire with such oxygen rushing through dry brush and grass.  From the back porch, I see eight miles to the Cross Timbers hills and ridge lines toward Stephenville and Hannibal.  Neither smoke nor fire can be seen, only dust and the affect of wind.

I seek to take photographs that will reflect the aridity, the drought conditions as well as today’s fierce wind.  As I have written before in another post, if you wait for the wind to die down or cease in Texas to work, you will never get anything done.  True.  A good pair of sunglasses and sunscreen provide protection as well as a sense of humor to work and play here in central West Texas.  To play hard and lose one’s self, one forgets the wind.

In the 1970s, at holidays with family in the Panhandle, near Canyon, Texas, we played football after dinner (served at noon), and we played with windy conditions.  Across a large front yard providing turf for, say, forty yards of a playing field, we had to compensate for the strong prevailing winds out of the southwest or northwest — low, short passes.  The teams were co-ed and young wives and female cousins ran and fought for every yard along side their husbands and relatives — one female cousin became a colonel in the Marines.  Touch football rules prevailed, sometimes flag football with a bandanna hanging out of our blue jeans.  The wind begone, we played anyway.  Of course, we forgot about the cold and wind as we played together at Thanksgiving, Christmas and once in the summer.

Here at the ranchito, the wind blows today, but there are no contests in the front yard, only birds tucked fast in the branches of the live oaks or nestled in pasture grass.  Here are some photos I took about an hour ago. 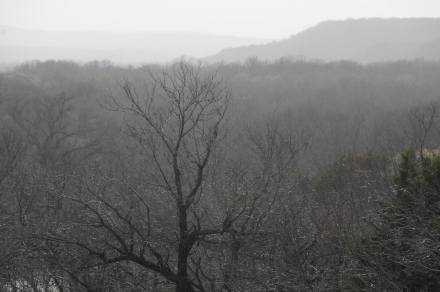 This view is towards the southwest, showing the dust in the distance and the leafless trees.

View towards Lilly's rock cairn and the Blue farm beyond the mesquite tree line.

Looking towards the west.

From the back terrace, I shot a thirty-second video of the landscape to the southeast.  Not much excitement in the footage, but it’s the middle of Winter.

16 responses to “Wind and flag football”