In the photograph above, I hold a rosemary blossom, indicative of moisture in the air and soil about the large rosemary bush on the west side of the ranch house.  The scent of rosemary lingers on my fingers as I type.  I use the rosemary for several recipes, but I favor its use when I prepare a sauce for steaks or lamb chops.

Before Christmas, my good horse Star died of colic.  The old boy was fourteen years old and in his becoming ill, the first veterinary I called to the ranch said he was a strong, stoical horse in that he did not lash out at us, his handlers.  Star was diagnosed at six in the evening and had to be put down at two o’clock the next morning at the Equine Sports Medicine and Surgery compound in Weatherford, Texas, where he was surrounded by three female veterinarians who took control and managed his passing.  Without being sentimental, I still look out my porch windows, even today, to see where Star is in the pasture.  Is he loafing under the mesquites?  I know he is not there, but I still look. 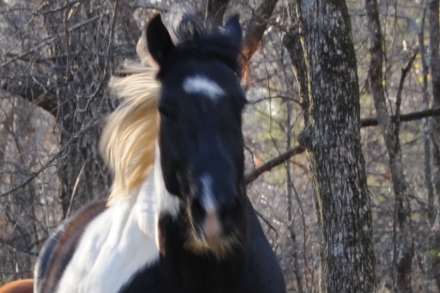 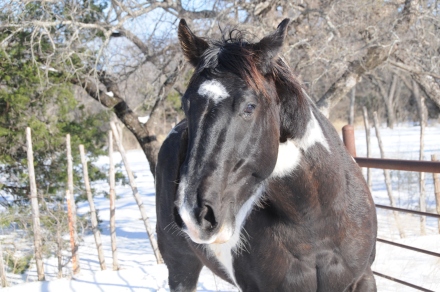 Filed under Life in Balance, Plants and Shrubs, Star