Texas Prickly Pear or The Nopal That Coyote Brushes 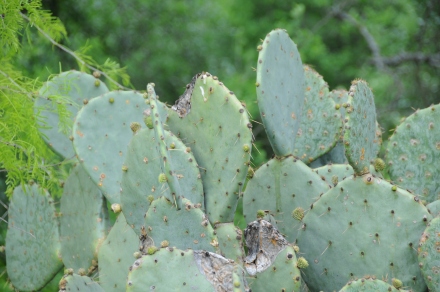 This is a common Prickly Pear in Texas, also known as Nopal Prickly Pear.  There’s much about the cactus to be learned and applied in the world.

Texas prickly pear has been used extensively for food: the tunas are eaten raw or processed into preserves, syrups and fermented juice, tuna cheese (queso al tuna) and a tea to cure gallstones. Commercial alcohol is produced from the sap and the tender young joints are used as poultices to reduce swelling. The juice of the joints is also used in candle making. For cattle food the spines are burned from the joints. The older pads contain oxalic acid and may cause oxalic acid poisoning when eaten to excess. Of course many animals and birds feed on the fruit. There is a legend that the coyote brushes the spines off the fruit with his tail before eating it. [Texas A&M University, Texas Native Plants Database]

The Texas Prickly Pear is found along fence rows especially on Flying Hat.  I am letting larger stands of the Nopal Prickly Pear alone to thrive.  Can’t do it all.  I have to set up a list of priorities on our place.  Mesquite control in the fields is my first priority, then comes the elimination of broomweed.  On the other hand, I have a fondness for the Nopal Prickly Pear–it relaxes me to see a good stand of it with fruit.  I’ve eaten the fruit in survival training and it’s okay.  Not cantaloupe, but good enough.  It’s soothing to see a healthy stand of Prickly Pear because it’s a sign that no pear-burning has occurred.  And, pear-burning is a task to be avoided.

My family burned Nopal thorns off the cacti for cattle to eat de-thorned cactus pads (other varieties of cacti, too).  My great-grandfather Henry Morris labored at such terrible work during the drought of the 1930s.  For him and others, west of San Angelo, it was a hot, brutal job.   In the 1950s, I used to see and hear the burning of Prickly Pear thorns on ranches near San Saba and Lampasas, Texas.  The sound the propane hand-held burners spewed was low-modulated, hollow–a raspy roar.  Violent, unearthly.  Uncommon sound, even for Texas, and you could hear the roar for miles around.  It was rather disturbing, the sound, because it signified hard times and lack of rain upon the region as well as ghastly work for the crew performing the task.  My uncle and cousin and their work crews would wear bandannas about their faces, shields from errant licks of flame and a filter from the smell of torched plants.  After the toil of the day, blisters arose in bubbles upon parts of their hands and wrists. I never burned pear, for as a boy they made me stay in the shade.

As my uncle and crew burned pear, they would first give the snakes and small animals time to flee from the burning.  The reptiles and animals would, after an hour or so, circle back to their stands of cacti, their habitat singed, but not destroyed.  The cattle would have emergency rations.  And, we might all see another day, a chance for rain.  No good feelings came out of burning Nopal.  We all suffered when pear burned.

Rain brought the good and allowed land and flesh to heal, and the coyote could use his tail for combing spines away–as legend would have it.

Millions of people cook and eat the tender young pads of several species of prickly pear. Besides being more tender, immature pads have less oxalic acid, which could be toxic in large amounts. Nopales (the edible species of prickly pear and the harvested whole pads of the same) are very nutritious. Nopalitos (small pads that are cut into bite-size pieces) are mucilaginous like okra, and good for thickening broths. The mucilage also helps control blood-sugar levels associated with adult-onset diabetes. Diabetes is a common affliction among native Americans who adopt Western high-fat, low-fiber diets. There is also clinical evidence that nopales reduce blood cholesterol. Widely ignored by Anglos, who often regard them as worthless nuisances, opuntias are abundant and healthy foods for those who know how to use them.

Prickly pears are a historically important reason that the Spaniards continued their conquest of the New World. They quickly looted the precious metals they were after, but they also discovered cochineal. Cochineal is a scale insect that feeds on prickly pears. Its body fluids contain a bright crimson, foul-tasting substance that protects it from predators. Ground up cochineal insects were used by native peoples to dye their textiles rich red or purple, depending on the processing. In Europe this color of dye was so rare that only royalty could afford it. In some kingdoms the colors “royal purple”(derived from a sea cucumber) and, after discovery of the New World, royal crimson from cochineal, were reserved for the king by law. The cultivation and export of cochineal dye became a major economic activity, and its source was kept secret for many years. The commercial cochineal was harvested and later cultivated from prickly pears in southern Mexico. Our Sonoran Desert species contain the same dye.  [From Mark A. Dimmitt, A Natural History of the Sonoran Desert (ASDM Press, 2000), as quoted from webpage of Arizona-Sonora Desert Museum Digital Library on Opuntia wilcoxii.]