Wind Turbines for Farm and Ranch

I don’t usually insert an article into the blog like this, but renewable and sustainable items like this I think are valuable.  So, here it is.

Wind farms supporting upward to 200 or more huge wind turbines on 200-foot towers are becoming rather commonplace across West Texas these days, but what about smaller wind energy solutions for the single farm or ranch?

Joey Henderson, who is general manager of Porter Henderson Implement Co. with stores in San Angelo, Ballinger and Big Spring, observed the big gap between the large turbines and smaller units and decided to do something.

The demonstrator unit installed at the Henderson home office, east of San Angelo, gives prospective buyers an idea what a small unit looks like. The Endurance Wind Turbine is a 5-kilowatt model on a 105-foot tower with three fiberglass blades on a induction generator.

Henderson Wind Energy, a division of Porter Henderson Implement Co., has been in operation about a year and covers a territory made up of most of Texas and New Mexico, said Doran Reynold, wind specialist for the firm.

Reynold said the small machines are not competition to large wind turbines. They serve different purposes. The large turbines harvest the wind and supply electricity for thousands of homes or businesses. The smaller units provide clean, renewable energy for a single farm or a home.

“We offer 5-kilowatt machines that are geared more for residential use, either in town — if a person lives in an area which is zoned for the 105-foot tower — or a farm or ranch home. But they are predominantly geared toward rural residential application,” Reynold said.

“The 50-kilowatt machine we offer is more geared toward commercial application,” he said. “It can provide enough electricity for a cotton gin or a feedlot, even a small school district. They can produce up to 200,000 kilowatt hours.”

“We recently installed our fifth 5-kilowat unit at Munday, north of Abilene. We have a couple units around Big Spring and another at Monahans,” Reynolds said. “A 50-kilowatt model is currently under construction at McKinney, north of Dallas.”

The whole movement these days is focused on more “green energy” and it works hand-and-hand with West Texas where there is a wind source that is mostly untapped, Reynolds said.

Joey and Jeb Henderson represent the third generation to operate the West Texas John Deere dealership. Their grandfather, the late Porter Henderson Sr. became the sole owner in 1954 which was started in 1928 as Whitaker Brothers Implement.

In 1989, a major expansion took place with the opening of John Deere Sales and Service Center in Ballinger. It is interesting to note that Porter Henderson Sr. managed Whitaker Brothers, the dealership in Ballinger, from 1934 to 1936.

Although chairman Joe Henderson Sr. still maintains “veto power,” the Henderson Brothers have give him no real need to use a veto. They have grown the family business at a steady pace by latching onto the latest space-age technology to compliment the John Deere legacy.

In 2008, Porter Henderson introduced the Real Time Kinematics Network, the newest tool in precision farming. The main purpose of the RTK network is to correct signals which get distorted coming through the atmosphere from a satellite. The latest technology is also using satellite imaging to record where underground drip irrigation lines are located, so the farmer can plant cotton directly over the water source.

For the Hendersons, harvesting the wild West Texas wind is yet another challenge to better serve farmers and ranchers.

Filed under Life in Balance

Greening of Flying Hat and The Grand Inquisitor 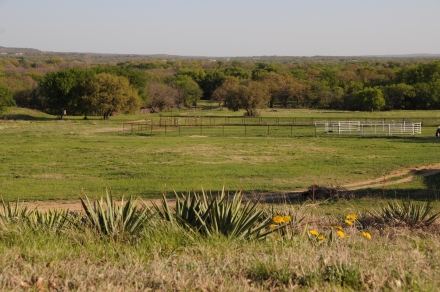 Flying Hat Ranchito bursts with grass and flowers this late afternoon in March.  With snowfall this winter, greater amounts of nutrients lobbed onto tiny snowflakes already formed around dust particles, so that natural fertilizer fell from the sky — snow and sleet, not Monsanto.  The grass appears greener, more vibrant.  Certainly, an abundance of flowers bloom that we’ve not seen since homesteading in 2003.

The springing to life, lately dormant, continues in The Grove, and I want to go down there and take photographs — mine are more documentary than artful, but so? — for you and my record. There are willow trees and wild Mustang grapes in The Grove.  A large oak tree that we have dubbed The Council Tree will surely have shade so that we can spread a red-checkered tablecloth on the tailgate of the pickup and have a sandwich and wine or beer.  Definitely, spring in Texas. 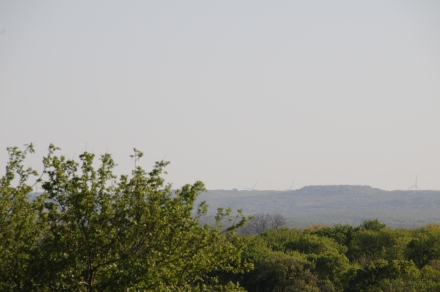 In this second photograph, you see the greening of the trees to the southwest.  If you enlarge the photograph, you can see the Desdemona windfarm of British Petroleum beyond the ridgeline in the distance.  Those windmills are approximately twenty (20) miles or more from us.  I have yet to look upon the windmills and be calmed.  Not that technology should be calming, but the monumental size of these windmills evokes a slight fear, a fever, as it were.   I am glad, however, that the wind is collected and that diminishes our dependence on finite resources.  In a sense, there is a greening in our region along with the greening Flying Hat.

Then comes “The Grand Inquisitor,” chapter five of Book Five: Pro and Contra, The Brothers Karamazov, Fyodor Dostoevsky.  Shortly before turning out the light to go to sleep two nights ago, I mentioned to Brenda that I was going to read one more chapter of The Brothers Karamazov.  The book is not light reading, I knew that.  But, I wasn’t prepared for “The Grand Inquisitor,” for god’s sake, and I’m not trying to be punny.  The sheer length of paragraphs in that chapter overwhelmed me, not to mention the nuances of religion so stretched out that I thought, You can’t wring anymore out of “bread” than what you have already done, Fyodor!  But he did.   My bed lamp did not go out as quickly as I had hoped.  I finished the chapter and have reread it.  Why, you may ask, am I reading The Brothers Karamazov?  First, I want to read the 100 best pieces of literature ever written.  That’s why.  (There are several lists of the “best and greatest.”  I’ll post the lists eventually.)  The Brothers Karamazov is considered one of the greatest compositions.  The second reason is that I am curious about what makes great literature, the writing of a person that brings you into their inner world of comprehension.

There is a lot of idiocy and mindless rant on television, the internet and in the newspapers.  So, in order to bring a sensibility of order and art to my world out here in west Texas, along with my horses and land, I read good things and I think about those things — even the Grand Inquisitor — as I work with horses, unload hay and plant native grass seed in the soil.  I intend to wear out, not rust out, in this great land of ours, the idiocies of the day notwithstanding.  We all need to continue to green in some way, even if it means reading “The Grand Inquisitor” before turning out the lamp.  Do choose another chapter, however.