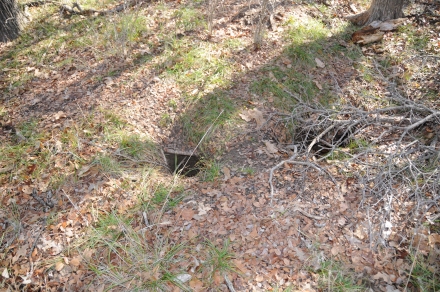 Along the banks of Salt Creek that divides my pastures into two sections, I find burrows of armadillo, skunk and other critters.  Back at the barn, below the ranch house during the night, various critters slide under the wall railings and scour for grain that falls through feed bins.  When I walk the dogs in the early morning — about 5:00 a.m. — I scan the trail for tail of skunk so as to avert a stinky collision of critter and dog.  When my dogs are sprayed by the effective skunk, I wash them in tomato juice.  That has not happened in thirty years as I have successfully intercepted the fight — at least thus far.

Here is Yeller with snow several winters ago.  He’s a good dog!  Yeller has a habit pattern of wanting to play at about 6:30 p.m. in the evening.  Sedate most of the day, when that time rolls around he will seek me out in the office and pester me until I play with him.  He is most fond of me wrestling with him on his huge pad, a 3×4 foot mattress-like dog pad, until I give up.  Yeller will lead me to his pad, pick up a toy and challenge me to play, “Take Away!”

I am not always a good play companion for I get too busy with very important things like writing a blog and will command, “Lay down.”

Yeller retrieves 25 lb. sacks of dehydrated goat milk and children’s toys from about the countryside when I used to let him run uncontrolled.  I’ve found rubber Daffy Ducks and Pluto the dogs in my front yard, carefully placed by Yeller after rambling through neighboring pastures and juniper groves.  I keep him indoors now and will let him out on a “field leash,” a twenty-five foot yacht rope leash I used to train bird dogs.  In most cases, the toys he brought back to the ranchito were abandoned by insensitive little primates in the veld.  He is a rescue dog, sort of St. Bernard-like.

This fine, courageous dog chewed my Peterson’s one night last week.  When I arose at 5:00 a.m., I found my field book that I have carried in field packs, backpacks and floorboards of many pickups scattered into hundreds of pieces on the floor of my office.  Many of the color plates had been consumed.  He was especially hungry for the quail and duck color plates.

Punishment?  No way.  The act of destruction occurred in the middle of the night and if I had chastised Yeller he would not have connected the “event” with my scolding voice that I hardly ever use because he is such a fine dog, good dog.  Besides with all the scents attached to that field book, carried in my sweaty hands, dropped in a bog, stuffed in field bags with Trail Mix and held in my possession since 1972, I could hardly blame him.  My fondest remembrance of referring to the Peterson was when I was up in the Sangre de Cristos, near Truchas, New Mexico, and I identified my first Black-billed Magpie (Pica pica) that flew about the trail I ascended into the Pecos Wilderness.

That’s okay, Yeller, I understand you.  I can always get another Peterson’s from Amazon.com, but there never be another dog like you.  Now, go fetch your toy!  It’s playtime!

Yeller is looking for Peterson.