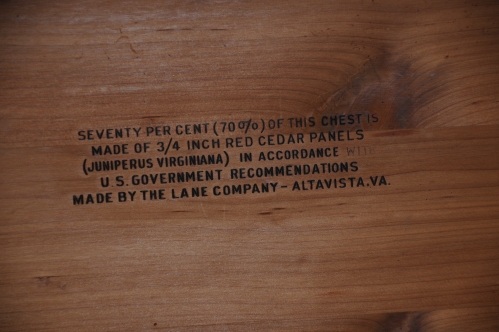 I have a cedar chest in the living room, placed between the sofa and the armoire.  I store Pendleton blankets in it now, but it was my mother’s cedar chest or hope chest as it was sometimes called. Opening it up the other day, I came across the trademark on the lid with the scientific name of the red cedar used to construct the chest: Juniperus virginiana.  I don’t recall ever having seen that before.

I find it quaint, old-style, to burn the imprimatur into the lid.  Frankly, I am not one given to hope, but rather working for a desired outcome seems to pay off better than wishing.  Cedar chests, however, were storage boxes of blankets, sheets, pillowcases and fine dresses for young women in the 1920s and 1930s in Texas, my mother being one of those hopeful for the ‘right man.’  The Lane Company that manufactured cedar chests went out of business in 2001, after having started constructing ammunition boxes for the U.S. military in The Great War.

As I open the cedar chest today, the red cedar smell permeates the blankets and handkerchiefs I store.  The scent of cedar brings back the vignette of my mother leaning down, opening the lid of her hope chest and caressing white sheets and pillowcases as I sat on the bed and read comic books as a boy.  Cedar is a tree.  Cedar was hope.

As the contents of such a chest would primarily be linens, construction in moth-repellent cedar, or at least a cedar lining, was popular. The Lane Company of Altavista, VA (1912, closed 2001)[4] were a notable maker of cedar chests. After developing production-line techniques for making ammunition boxes during World War One, they turned these production techniques and a patent locking-mitre corner joint, into vast numbers of chests. This was aided by strong advertising, using a teenaged Shirley Temple as a model, in a campaign targeted at GIs and absentee sweethearts of World War II. They were particularly well-known for their practice (since 1930) of distributing miniature (12″ long) cedar chests to high-school girls as advertising gifts.[3] The Eastern Redcedar (Juniperus virginiana) is the “cedar” used in making moth-repelling cedar chests and drawers, as well as pencils.

Naturalist quote of day: Aldo Leopold on danger of not owning a farm

There are two spiritual dangers in not owning a farm.  One is the danger of supposing that breakfast comes from the grocery, and the other that heat comes from the furnace.

To avoid the first danger, one should plant a garden, preferably where there is no grocer to confuse the issue.

To avoid the second, he should lay a split of good oak on the andirons, preferably where there is no furnace, and let it warm his shins while a February blizzard tosses the trees outside. 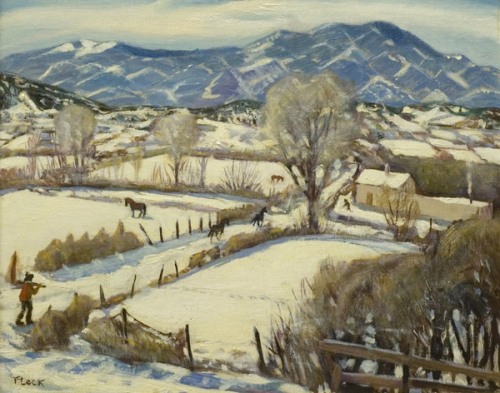 Painting of Joseph Fleck associated with the Taos Art Museum and Fechin House.

Filed under Life in Balance, Life Out of Balance, Nature Quote of the Day