In my regular field work here on Flying Hat, two new discoveries were made this morning of Texas flowering plants.  One discovery  was the Texas Skeleton Weed (Lygodesmia texana), also known as Purple Dandelion, Flowering Straw.  The other discovery, this one rather exciting, was the Prairie Sandbur (Krameria lanceolata), also known by the name of Crameria, Ratany or Trailing Ratany.  Before we go to the Prairie Sandbur (accurate spelling), let’s look at the Texas Skeleton Weed, shall we?  (I’m beginning to sound like Mr. Rogers here.)

This beautiful lavender flower is the Texas Skeleton Weed (Lygodesmia texana), also referred to as the Purple Dandelion, Flowering Straw.  These flowers appeared rather suddenly in the last two or three days.  The term skeleton is applied because of the  leafless stems and the odd angles of the stems, analogous to skeletal assemblies.  According to Loughmiller, Texas Wildflowers, “When the stems are broken, they exude sap which coagulates into a gum.”  The medicinal qualities of this plant are presently unknown to me.  I am currently searching my bookselves for my medicinal plant book for North America.  I do have Richard Evans Schultes, Hallucinogenic Plants, New York: Golden Press, 1976, but this Texas Skeleton Weed is not in it.  I don’t like the term, “weed.”  This plant is far to beautiful to be designated, “weed.”  Perhaps the Bull Nettle is a weed, but I even have my doubts about the construct of the botanical term, “weed” applied to it.  Weed carries a cultural signification of unwanted, not desirable or bad.  I know we use the term, “weed,” a great deal and I understand the context, but I think it should be dropped from the lexicon. 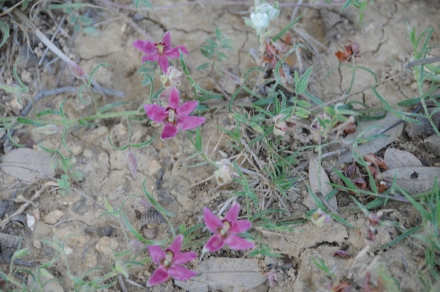 The Prairie Sandbur is the reddish flower in the photographs above.  It is also known as the Trailing Krameria, Ratany, Crameria and Trailing Ratany.  This is not the sandbur of the grass family.  The leaves and flowers grow from prostrate branches.  According to Loughmiller, this plant and flower is neither conspicuous nor abundant.  They state that the Prairie Sandbur does occur in many parts of the Trans-Pecos River area of Texas.  Our ranch is in the West Cross Timbers region of Texas.  We are Trans-Brazos by about 50 miles westward.  This Prairie Sandbur was found on the east side of Poprock Hill in a well-drained slope area.  This plant may be the rarest find on our place.  I have looked carefully about Poprock Hill and this is the only cluster!

I went out to the Pecan Tree Pasture this morning and hoed or cut out by the hoe some 100 or so Bull Nettles (Cnidoscolus texanus).  I still have about one more acre to hoe.

Here you see the white blossoms of the Bull Nettle in the field.  Actually, hoeing the plant is rather easy since the vascular main stems are soft at this stage of growth, plus with all the rain we have had, the soil is soft.  This photograph is looking southward, towards the Old Bryant Place, and you can see that the pecan tree, for whom this pasture is named has dark-green foliage.

The Bull Nettle is a plant to be avoided.  The plant has leaves that are prickly as well as the stem and if you brush up against it, the nettles will sting.  Loughmiller says the effect of the nettles will last 30-45 minutes.  The stems, if broken, will exude a sap that some people discover, too late, is an allergen.

Today, I brushed up against a Bull Nettle once and I was wearing denim jeans (Wranglers), but the nettle penetrated the denim and I felt a sharp sting.  It was a light brushing, just once, but still burned.  I have a quick recovery to Bull Nettle in my system and the stinging lasted for about one minute.   My initial contact with Bull Nettle occurred when I was three or four-years old and I was with my mother and grandmother at the Sand Cemetery in Bend, Texas.  They were on a cemetery clean-up for our ancestors’ graves when I grabbed a Bull Nettle (trying to help) in my right hand.  It had a lovely blossom.  I really, really experienced pain, especially in the palm of my hand, and for several years, the palm would erupt in a rash.  I think that early exposure to Bull Nettle gave me a bit of tolerance, but not immunity.

The Bull Nettle has a personal and family history that goes back sixty-four years, to a time when we cleaned up the cemetery for the Morris, Baxter and Brazil families at Bend, Texas.  With the 400 or so Bull Nettles I have scooped out of my pasture, every Bull Nettle or so, I think of my family and how I came to be doing precisely this hoeing, on this cloudy day in Texas.

I supplement my typing operations with cross-checking from other sources, particularly the online services listed under my page, “Native Shrub Identification Guide.”  The sources found online at the Ladybird Johnson Wildlife Center are quite valuable.

Filed under Plants and Shrubs, Recollections 1942-1966