October in Texas: dusting and sunflowers 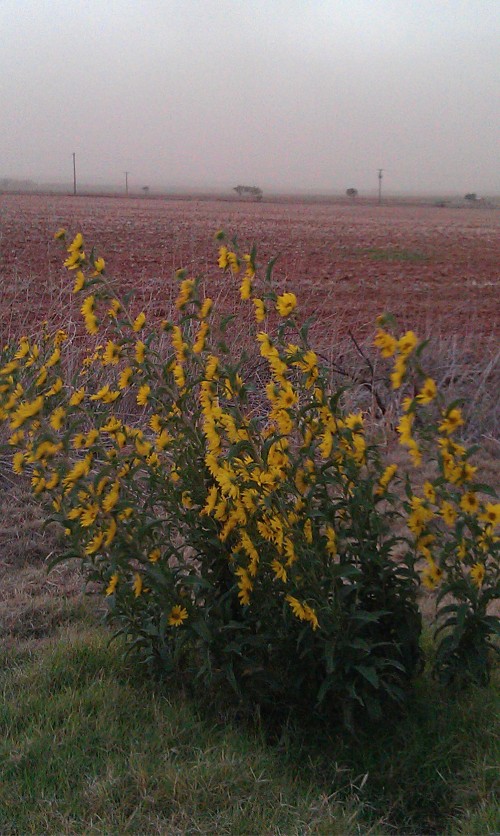 A light “dusting” of dust, not snow, descended with high winds upon Texas yesterday. A cold front came in the afternoon that sent temperatures this morning down into the lower 50s F. I love changes in weather. Of course, not with abrupt turns that bring destruction and fire, but changes like yesterday: brisk winds, racing clouds, lightening, rain in the distance that you can smell (my dog, Yeller, lifts his head high to catch the scents far away), dark clouds with long trailing edges that signal rain prospects and all of it bringing anticipation to the heart that tomorrow will be different, a new day with fresh starts all over the world.

How can one capture that cachet of weather change and anticipation for riding your favorite horse into the future? ( I am down to one horse, my Star paint gelding, so he is the favorite, the last of the remuda — but I will build a remuda back with brown mares that foal in the Spring.)  Well, you can’t capture it, but you can take a photograph that elicits Texas weather change, and the above photograph of Texas plains, dust and sunflowers, brings yesterday’s moment to pause.

You must ENLARGE the photo above to get the full effect of yesterday’s “dusting” around Abilene, Texas.  The evocations the photograph brings reminds me of migrating pioneers in the nineteenth century that saw the Trans-Mississippi West plains and stopped, not wanting to venture farther onto land that had little water, few trees and a population that spoke strange languages.

O, Pioneers!  Be not afraid!  There are springs and rivers, trees are in the ravines and highlands!  The Indians will trade and parley and teach their tongues, if you will tread lightly upon the terrain!

Yes, I know that pioneers did not tread lightly.  There were, however, places of concord — Bent’s Fort, the Pawnee, the Tewa, among other spaces and culture.

Despite this riff-tangent about the American pioneer, I come back to the weather change of yesterday that brought cold winds, turning the sunflowers to face the southern climes.  Bees and butterflies still feasted on its pollen, riding the petals like cowboys on broncs; the contrast of red earth, dusty skies and yellow flowers showed a tough plant on inhospitable soil, holding on tight and bearing its colors to the world.  I love these types of weather changes.