I drove thirty-six miles this afternoon along SH 919, US 180, SH 16 and there was fire and smoke, large plumes of newly-erupting fires and smoldering cedar trees emitting smoke across the highway like a fog.  I wish it was a fog.  Ashes fell out of the sky, the wind blew steadily from the north, a welcome change of sorts that turned serious for Palo Pinto, Texas.  Thirty-six miles I drove and saw this fearful landscape and that was only the southern perimeter of the Possum Kingdom-Palo Pinto Complex Fire.  Some of these areas are still burning from days ago.  Fire crews with red lights turning appeared all along the highway.  Game wardens entered ranches to warn inhabitants.  Farmers and ranchers unlatched their gates along the route to Palo Pinto to allow crews to enter.  TV crews and their satellite vans were set up — NBC, CBS, ABC and others.

Everywhere I looked on the thirty-six mile southern perimeter there were plumes of smoke and fire like miniature volcanoes in the gullies and along the hillsides.  I have traveled the same circuit for several days and the smoke still rises about the countryside.

I came home and found messages from our Co-op water company.

Our water Co-op, Barton Creek Water Cooperative, left two urgent messages one hour ago to stop using water except at a minimum.  The Possum Kingdom Fire Complex is currently draining the Gordon Water Supply Cooperative and they have terminated water connections for us on Barton Creek Water Cooperative.  We are ordered to restrict or terminate usage and haul water for our livestock.  We are to be conservative in usage at the very most.  Power poles have been destroyed in the fire and the electric company has cut off power to the Gordon Water Supply pumps.  Gordon is six miles north of us.

The outlook is grim if our area does get any rain and more water restrictions may occur.

Here on our place we have a large stock pond that is down in elevation, but has plenty of water for Star and other livestock.  I have offered to place several horses and cattle on our place since the stock tank is large.  I have a small well, but the water is not potable for animals and humans, but we may use it to water plants.

We have filled up our two bathtubs and collected water in pitchers, jars and crock pots.

The Co-op has just called — 8:55 p.m. — and said that the water restrictions will probably be temporary, but again stated to be conservative.

Late this afternoon, Palo Pinto, a town north of us some twenty-five miles, has been ordered to evacuate since the winds have shifted from the north.  A large jail is being emptied and prisoners transferred to other units.  The fire jumped the Brazos River and the fire crews have concentrated at Palo Pinto, the county seat of Palo Pinto County.

Before the cold front came through in late afternoon, my thermometer registered a high of 109 deg., but settled at 103 deg. for a couple of hours with a humidity at nine percent.

The winds have died down after dark and we are preparing for bed.  Weather forecasts tell that rain may fall tomorrow night — scattered showers, but we’ll take it.

Here are some photographs I took this afternoon at the SH 16 and US 180 intersections and a few other places as captioned.  With a click of your mouse you may enlarge and find the obligatory detail in these matters.

Sunset and smoke over Strawn, Texas 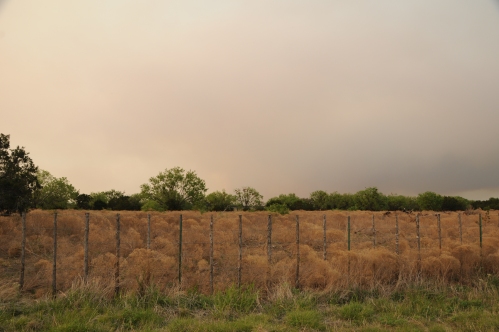 Dead broomweed from last season that is tinder for a spark. This field is on the road to Palo Pinto, Texas, along US 180.

A round-up of cattle in holding pen for transfer in case fire comes, on SH 16, north of Strawn. 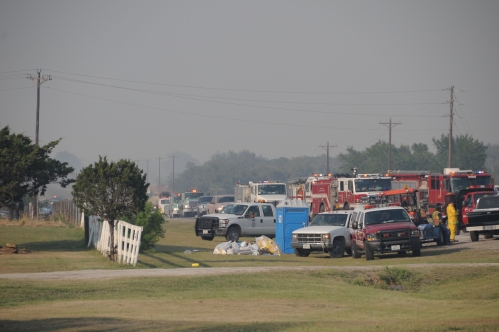 Crews and trucks assembling for the dash to Palo Pinto, Texas. This is at the intersection of SH 16 and US 180. Possum Kingdom is eight miles away in the background.