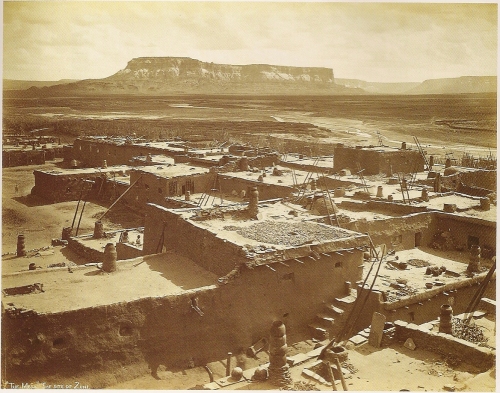 Recently, I asked Martha Sandweiss, a Princeton University historian and author of Print the Legend: Photography and the American West, why people are so attracted to Western photographs — hoping, really, that I’d learn something more about myself.

Photography, she said, became a way of reframing the country after the Civil War. “The West was a place beyond history, during a time when recent history was really painful,” Sandweiss said. Many landscape photographers kept their cameras trained on the wilderness and its prospects, often omitting the West’s history and people to create a powerful illusion of a place where only the future mattered. “There’s this intense desire to imagine the West as our last great hope.”

To Sandweiss and Walker, the West in landscape photography is a place beyond history, a place where only the future matters, the West as our last great hope.  I agree.  Placing this position on one side, say, the positive side, we have the other position that Western landscape photography displaced a painful past (Civil War in this case), created an illusion and omitted actual history (relocating Indians, extermination of vast herds of buffalo, hollowing out natural resources).  Both sides fit together although we repress the pain, illusion and facts in favor of a place beyond history.  Look at the following three photographs, continue reading and let me explain. 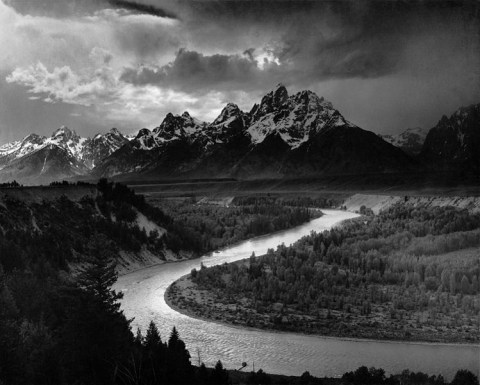 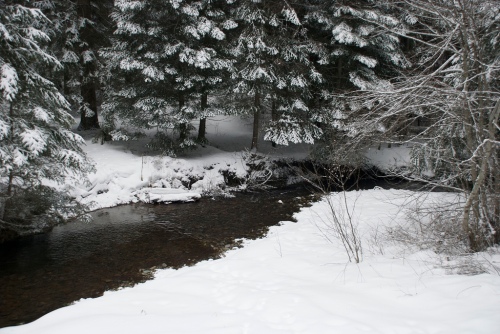 In the three photographs of Ansel Adams, Jeff Lynch and Montucky, each has captured a western landscape in pure form, without human artifice intruding — no church spires, courthouses, schools or bridges.  As we wander into these Wests, I submit that we want to leave behind those objects that change the terrain — automobile, antennas, roads.  Further, if we seek to preserve these pure forms, we must leave behind the ideologies of exploitation, over-consumption and race.  We may desire preservation, but the ongoing drive of the machine into the West can hardly be slowed down, much less stopped, as population expands.  We may want to leave behind the ideologies and terrain-changing objects and, though difficult, it is not impossible.

I do not view nature in these photographs as a cropping or harvesting opportunity and they are not presented as such by the artists.  I see rivers, streams, trees and mountains that are in themselves moving and living things, having the same molecular and atomic substance that make up my flesh, bones and hair.  Different arrangements for a time, the land and me, but substantially the same.  These three photographs give rise, I believe, to humanity’s kinship with the earth and invite gentle, ethical occupation of the land.  When I move into these Wests I do not want to construct a Monticello, but rather fit my home and hearth into the line and contour of the earth as in John K. Hillers, Mesa at Zuni Pueblo, seen above.

Leaving artifice behind, slowing the machine and having kinship with the earth in thought and deed has been tried before, and the dream has died ten-thousand times and it will die again.  Sand Creek and Ludlow coexist with the Rockies as backdrop in our history — blood and beauty.  Nonetheless, every vignette of western landscape offers the dream again, a chance to move on past the pain of history and into the wild without the machine.  Art museums, galleries and photographic books elicit a response in the viewer that there is a purity of form beyond the city, in all landscapes, all regions.  As a special art, western American landscape photography matters because it renews again and again what has been torn in our history.  We build upon beauty momentarily captured on film and not what has been shattered in history.  Western landscape photography can help us transcend what has terribly gone wrong.  As a result, I submit, we will take lighter loads and bigger hearts in our wagons when we migrate West next time.

It is all there in the photographs, beyond the lens of Adams, Lynch and Montucky.  They point the way.  Can you not see it?

Not all people that view landscape photography of the West will see renewal or lessen their impact on the land.  The West is still seen as ripe for exploitation and extraction.  New lamentations are writ everyday in the West and many of them are never heard, yet they are always seen — on film.

Mesa at Zuni Pueblo from James L. Enyeart, Land, Sky, and All That is Within: Visionary Photographers in the Southwest, Santa Fe: Museum of New Mexico Press, 1998.

Additional comment, February 2, 2011.  Caralee Woods of Kanab, Utah, sent this by e-mail and I post it as another example of the appeal of the western image.

Filed under Life in Balance, Life Out of Balance