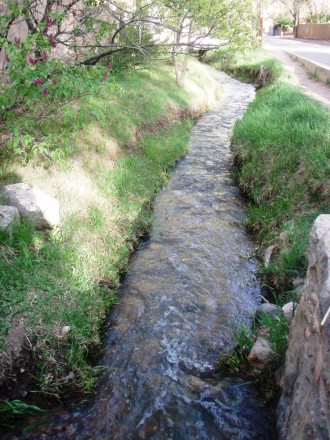 Throughout the upper Rio Grande bioregion, from the uplands of the north to the more desertic and mesa lands to the south, watercourses and their tributaries stand apart as the most defining features critical to all forms of life, biotic and human.  For centuries, this region has been homeland to the aboriginal peoples, the Tewa, Tiwa and Keres (Pueblo) Indians, and the descendants of the first European settlers, the hispano mexicanos.  These cultures revere water, treasuring it as the virtual lifeblood of the community….Nestled within the canyons and valley floors, tiny villages and pueblos dot the spectacular, enchanting landscape.  Their earthen ditches, native engineering works known locally as acequias, gently divert the precious waters to extend life into every tract and pocket of arable bottomland….

But these systems have also performed other important roles…social, political, and ecological.  As a social institution the acequia systems have preserved the historic settlements and local cultures spanning four major periods….The great majority of acequia villages are unincorporated.  In these instances the acequia institutions have functioned as the only form of local government below the county level.

In 2007, I drove up Santa Fe River canyon from downtown to the iron gates of the reservoir that held water for the town, including the Acequia Madre.  The acequia no longer irrigated fields, but the channel held water for occasional diversions to small plots in the neighborhood.  For a distance of about two miles, I traced the acequia back towards the center of Santa Fe.  All along the way, I saw some neighborhoods had gleaned the acequia while others ignored it.  At the end of my search near the junction of the Old Santa Fe Trail, the acequia held little water, but it was visible and grasses sprouted about the narrow canal.  It appeared ready, at attention really, to carry water again.

I spoke with a vintner at Dixon, New Mexico, north of Santa Fe, who also superintended the annual cleaning of the Dixon acequia.  She told me that local inhabitants still work on keeping their canal clear of brush, even if it does not border their property,  a communal behavior extending back to prehistoric times.

On my great-grandfather’s ranch in San Saba County, Texas, the local inhabitants of Colony and High Valley constructed a grist mill for grinding grain in the late-nineteenth century.  They dug a mill race or channel to divert the water of Rough Creek to the wheel that powered belts to millstones.  My mother often told me she remembered her father coming out of the mill covered in flour, face smothered and sweaty.  As a boy, when I visited my great-grandfather’s ranch, I followed the channel upstream on Rough Creek to where the water diverted.

Today, the mill still stands sans roof, windows and doors; the mill race is visible, though eroded, and no water flows.  On the second story ledge of the mill, a prickly-pear cactus took root in shallow soil, erupting ten or twelve paddles of cacti clearly visible from the ground, its propulsion coming from the prevailing southwesterly wind from High Valley and warmer climes in Mexico that blew seed upwards onto the old mill’s second story.  To this day, picnics and family reunions congregate about the old mill and under the pecan trees nearby.

Although some acequias have fallen into disrepair and the old mill will no longer grind grain, no lament is necessary because these structures symbolize the communal efforts of people to work with the flow of water.  Acequias can be cleaned out and the mill race can be reconstructed to a higher ground so that its flow can be opened to a newly-planted orchard of plum and peach.  The mill race becomes acequia.