Earlier today, I wrote that I sought fresh deer sign on our place.  One month ago, I found one deer track near the salt lick: March 20, 2010. Since last month, I have found no fresh deer track and I know how to find track.  This is not to say that no deer have passed through our place because that would require a more intense observation and scan pattern.  And, besides, the deer may return if they have fled, as I suspect they have.

But before I give you my field report this afternoon (I will continue to scan the grove and pasture until dark obliterates my view), let me explain what was, what used to be, on our place. 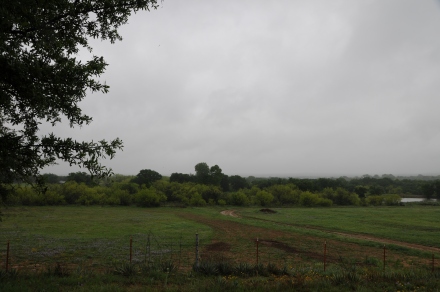 Photograph No. 1:  This is a view from Poprock Hill, looking east.  This photograph was taken on the terrace a few feet from our back porch.  The deer used to browse in the mesquites on the edge of the pasture.  The pasture on the other side of the mesquites is the Blue pasture, our neighbor to the east whose family has been here since the early twentieth century.  There is a pond on the other side of the mesquite line and deer, when we moved here in 2003, would loaf most of the day around the pond and in the brush.  The deer were predicable in browsing from left of the photograph to the right of the photograph.  Our pond is seen on the right side of the photograph.  In the late afternoon, the deer would pass in the distance, the herd numbering six to fifteen on any given day.

In 2008, a new set of neighbors set up residence beyond our pond and built a home, workshop, barn and corrals.

Photograph No. 2 shows a view from our terrace, looking south, southeast.  Deer would pass a few years ago back and forth into the brush.

Photograph No. 3 shows the view to the southwest.  The deer would browse into the grove beyond the barn, and, thence, towards the mountains in the distance.

Not only have our neighbors constructed a new home, but they have cleared the brush on their place.  This is not unusual, as it is customary for homeowners to clear thickets and mesquite.

No. 4: Cleared Acreage of Neighbors to the Southeast, April 2010

Photograph No. 4 illustrates the acreage cleared in the last two years.

Today, I set up a focused field scan for deer.  I will continue today and into the early darkness for visuals of deer.

I found one deer print along the road into the grove.  It was fresh track.  Near the salt lick, I found no track. 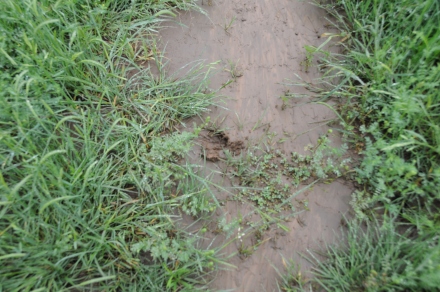 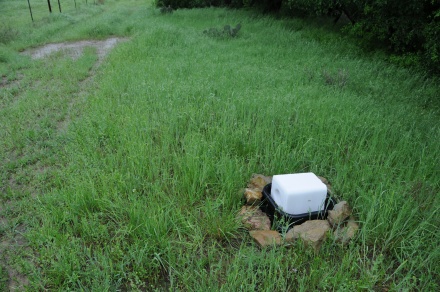 In a sack this afternoon, I carried three quarts of corn to the salt lick.  As I walked down the road to the salt lick, gunshots commenced on the Dooley place.  Fortunately, since the last target-practice episode a few weeks ago, this firing of at least 100 rounds of two caliber of pistols or rifles stayed within the property lines of the Dooleys.  They take care to be safe in their shooting practice.

I scattered the corn near the salt lick.  No deer sign.  By the purity of Aristotelian logic, however, no deer sign is actually a Sign.  And the reading of the Sign is not pleasant.  It reads, thus:  The deer population that migrated through the Blue, Hall, Dooley, Bryant and our properties has been erased.  Since 2007, with the building of three homes in the immediate area (within a half-a-mile), the clearing of brush and the target practicing of young and energetic youth, our deer population, by my count and observations, has dwindled to one deer track from a high of fifteen animated, graceful creatures of grove and pasture that used to browse.

Neither do I see fox anymore.  Today, with the firing of shots, as I carried corn to the grove, crows cried Alarm! Alarm! and it was not my ambling that elicited the call, but the report of hot lead entering the good earth.  The principle of using one’s property as one sees fit is a constant in our culture, and it is not my aim to dislodge that behavior from our country, and I think it futile to even suggest a small amendment to it, but rather my aim is raising the morality of good people to the ethics of wild nature that show us we are not alone, but that we inhabit and live upon land that is home to many creatures.  I cannot stop my neighbors from alarming and scattering wildlife, and, most unfortunately, destroying the homes of animals and birds.  I used to hear more and see more wild things here on Flying Hat.  Now I hear and see less.  It is still rich and enchanting, but much has been diminished since we have moved here.

Between now (4:32 p.m.) and sundown, the darkness, I will look upon the pastures and seek the profile of the graceful deer.  If I sight even One, I will come back to this post and log its appearance before I sleep tonight.

I would not, if I were you, look for another entry to “Erasure of Deer” written on this post today.  Or, possibly, ever.

Filed under Deer, Life Out of Balance

4 responses to “Erasure of Deer”